The Beginner’s Goodbye by Anne Tyler

The Beginner’s Goodbye by Anne Tyler


Out of the blue, a tree crashes down on Aaron and Dorothy’s home – and kills Dorothy outright. Life as Aaron knew it was completely destroyed, along with most of his living room. 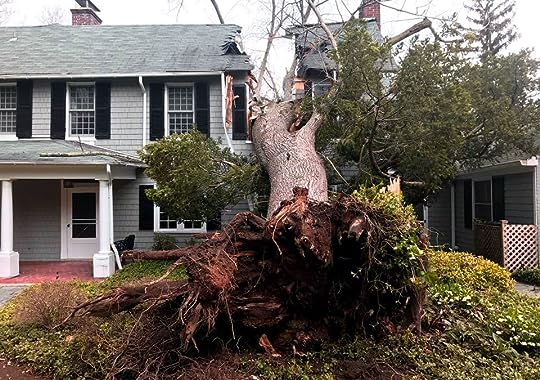 Aaron and Dorothy had always been an “odd” couple according to Aaron’s bossy sister, Nandina. (Anne Tyler’s forte is injecting humour at unexpected moments in a narrative.) Aaron confesses that:

“(Dorothy) was short and plump and serious-looking…. My sister said Dorothy was too old for me but… Even though she was eight years my senior – forty-three when she died – she seemed younger, because of that good strong Hispanic skin. Plus, she had enough padding to fill out any lines….. My sister also said she was too short for me, and it is undeniable that when Dorothy and I hugged, all the wrong parts of us met. I am six-feet-four. Dorothy was not quite five-one. If you saw us walking down the street together, my sister said, you would take us for a father and child heading off to grammar school… Dorothy was a doctor. I work as an editor in my family’s publishing firm….”

This story deals with sudden, tragic death, and its effects on the ones left behind. The Beginner’s Goodbye was published in 2012, many years after Anne Tyler’s own husband, Taghi Modarressi, had died of cancer in 1997. By 2012, Tyler could probably still sharply recall that terrible time of loss, but her abiding grief had hopefully become more of a shadow pain. Life does go on, and time does heal or at least dull the pain of most wounds.

Aaron’s grief-stricken lassitude, his need to reconnect with Dorothy, his self-examination and recriminations, his guilt at past things said and done – all of that had a ring of truth and familiarity to it.

I loved the quirky scenes when Dorothy “resurrected” and would disconcertingly appear by Aaron’s side in public. Anne Tyler literally gave life to the platitude that bereaved people often receive from well-meaning friends and relatives: “Her spirit is still here with you….!”

This was one of Anne Tyler’s most emotionally vivid books and I really enjoyed it for this reason. Some readers felt uncomfortable with this aspect of the novel. Perhaps they have come to expect that all good literary fiction has to be glum and unemotional, or concentrate solely on depicting humanity’s descent into depravity or hopelessness, etc., etc., etc….?

In The Beginner’s Goodbye, we do indeed have a very unhappy protagonist, but we aren’t forced to drown forever in gloom. Aaron presents himself as a staid, unadventurous character, averse to ostentation and change in any form. Well, as I mentioned before, a tree topples over, destroying his house and killing his wife, so change is forced upon him. We watch Aaron evolve from a rather closed, self-absorbed man into someone capable of having (and indeed creating) a new life.

I loved the colourful characters: curmudgeonly, goofy Aaron, the long-suffering Dorothy, and the office clerk, Peggy, who wears all those extreme outfits. Peggy always cracked me up – what a live wire! (I must admit that I identified with bits and pieces of all of these characters.)

This is one of my all time favourite Anne Tyler reads. It came to me at a time when I could truly relate to it and left me profoundly satisfied – even a tad healed. Anne Tyler got it exactly right.

3 replies on “The Beginner’s Goodbye, by Anne Tyler.”

Sounds like you have a personal connection to this novel, and also sounds like a beautiful read!

A tad too emotional for me, probably, but unexpected humour might just work.

You’ve got me interested in this one, thanks for sharing

I hope you enjoy this one, too! The story is told in Aaron’s voice, and what a lovable goofball he can be sometimes! I think Anne Tyler is very brave, putting at least a portion of her own experience with grief out there. I am surprised that it took me so long to appreciate her books. Her characters tend to run to a certain type, but you can’t manufacture what you truly haven’t experienced, I suppose, and make it feel real. Breathing Lessons cracked me up so many times. I loved the main character in that one, I share so many of her loopy, fanciful characteristics! Please let me know your thoughts on this one after you’ve read it, even if you DNF it. Cheers, Susan