Vicious is a brilliant tale about all the shades of grey between black and white, evil and good. Dark, sarcastic and clever, Schwab has created a masterpiece full of complex characters that would mess with your mind. ‘Cause, let me warn you, there are no good men in this game.


Vicious alternates a chapter in the past -ten years before- with one in the present, which in some books result tedious to follow, but Schwab manages to create the perfect balance between the two.

The first part is centered in Victor’s way of thinking, in his version of the story. Torn between jealousy and admiration, friendship and desire, Victor is obsessed with his best friend Eli and he would do anything to amaze him, to outgrow him.

Eli, with his shiny smile and flawless facade, is the golden boy in the school, the one both students and teachers admire alike. But he only shows Victor his true self, and something about Eli was decidedly wrong.


It was like watching two people, one hiding in the other’s skin. And their skin was always too dry, on the verge of cracking and showing the color of the skin beneath.


Moved by his mixed feelings, Victor convinces Eli to investigate how to create an ExtraOrdinary, a person with unnatural powers, trying to show Eli he is as great as him, even better. Because Victor is done being Eli’s shadow.

Ten years later, nothing had changed. Eli is still the hero, while Victor’s an outlaw. There is no friendship left between them, only the fierce desire to beat kill the other. 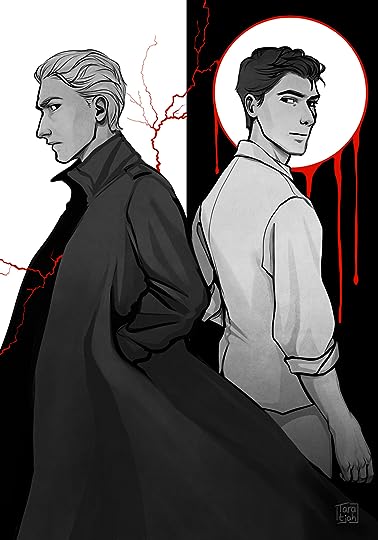 
Victor was the guilty one. The Victor that he knew was dead, replaced by something cold and vicious. A twisted, violent version of himself. () A murderer. A monster.


The second part shows Eli’s thoughts, and it’s BRILLIANT. He is certain he is the hero, the one chosen by God to deal with the EO. After all, “They aren’t ExtraOrdinary. They are wrong.”


Eli Ever justifies his actions in a totally sensitive way. Everything he says makes sense, even though you know all of it is wrong. Victor may not be a hero, but Eli is definitely a villain. It was INSANE reading the two sides of the same story. Victor and Eli completely blew my mind, I need more characters like these two on my shelves.


But Victor and Elli are not alone. Two EO sisters, Serena and Sydney, each one of them in a different side of the battle, are the key in this fight. Sydney is still too young and her power is more important than her way of thinking, but Serena is another unique, complex character that no one, not even Eli, was able to figure out.


“There are worse ways to die,” said Serena. “And worse things to do than die. I promise I’ll make it quick. (…) Pull the trigger.”

It’s been half a week since I finished Vicious, and I’m still so astonished that the only thing I’m sure of is that I could never make justice to this twisted piece of art.

If you love books that make you question what’s wrong and right, and morally grey, complex characters, you need to read this story. I knew when I was reading it, and I don’t have any doubt now, that Vicious is going directly to my all-time-favourites shelf!

As usual, another enticing review, Laura! Schwab is a talented author. Her characters spring off the page and come alive before your eyes. Great job, Laura!

Thank you, Susan!! I agree. I love characters, specially when they are complex and grey, so this one was perfect for me.