The Stranger in the Lifeboat by Mitch Albom


Mitch Albom has made a literary career out of discussing and examining the concept of “faith.” We read his books, we discuss them in book clubs, some make movies out of them, and some deride them because they would rather follow science or logic and leave emotion or hope – or whatever it is that drives humans to cling to a deity – out of the equation for the grand scheme of things.

(I sometimes wonder if the latter group isn’t right: we humans seem, in our worst moments, to resemble a germ or virus that has devoured so much of the beauty in this world.) Despite centuries of documented wars and other misdeeds to serve as examples to guide us down a different path, we humans have become even more greedy, more materialistic and impossibly desensitized to each other’s fates.

Money – paper from a tree, or, now, a typed number in an online bank account – determines your worth in this world. Money is power. Power ultimately corrupts and oppresses those who “have not.” The Oppressed eventually overthrow the Oppressors, there are bloody revolutions, etc., etc., etc….. We humans repeat this vicious cycle endlessly, because we can’t seem to focus on anything else other than conflict and personal gain. 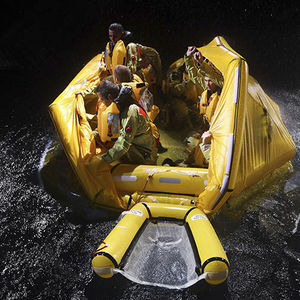 In The Stranger in the Lifeboat, Benji Keaney is a complex character who harbours a guilty secret: was he complicit in the explosion that sank the luxury cruise ship on which he served as a lowly crew member? Benji comes across as a decent human being: his journal exhibits his great love for his wife, Annabelle, and his admiration and respect for fellow life raft member, Geri, showed that his heart was in the right place: he wanted to help the other passengers survive, even though he could not bring himself to “believe” – to have faith that The Lord (the last character in this novel that was pulled from the ocean) was always with him, even in his darkest hours.

Towards the end, when Benji mourned the death of the sea bird, his grief for his wife and his survivor’s guilt – for the lives of all the others who had been lost from the lifeboat and cruise ship – completely overwhelmed him. (The author was also probably trying to show that Benji is not a cruel person, for reasons that will become clear later on in the story.) The interesting twist in the last third of the novel was somewhat foreseeable – but no spoilers here!

I’m still scratching my head, trying to decide whether Albom succeeded in pulling the wool over the readers’ eyes? Were all the passengers real? Was this in fact a concocted story – a prank, as was suggested at one point? Was Dobby the grand orchestrator of the entire disaster at sea? Or did he leave a bogus manuscript behind for Jarty LaFleur to read, for his own devious motives? I know that these thoughts will chase each other in my mind for weeks to come – and this is the sign of a good book. We may not love or enjoy all of its parts, but the sum of those parts have left us with quite a lot to think about and discuss in Mitch Albom’s latest offering.

In the context of religion, I usually refuse to be labelled “Catholic,” Christian, Confuscian, Buddhist, Shintoist, or any or all of the religions of this world. I like to believe in energy, in a form of Karma: the good that we do and send out eventually comes back to us; likewise for the bad or evil that we let loose out into the world with our thoughts, words and actions. Hope is an important word for me. Without hope, humanity is lost, so I strive always to believe that we each have our small, peculiar purpose on this earth. I truly believe that we are here to learn something. Every time I listen to George Harrison’s song, Give me Love, Give me Peace on Earth, I smile when I hear the line “Keep me free from birth.”

Reincarnation. Your soul’s return to this earth to complete the cycle of learning that, hopefully, will eventually release your soul from its earthly chains. Such a compelling idea!

I suspect that I may have to come back to edit this review with more thoughts on this gripping story. Faith and the lack of it is extensively discussed, but no concrete or compelling solutions are ever offered as to why The Lord did not (and continues not to) step in, perform a lovely miracle and save all the occupants of the life raft. Are we, in fact, the authors of our own stories here on earth, so it is up to us to find the meaning in each journey, without Divine Intervention to save the day for us?

I really enjoyed this audiobook, despite some of the plot inconsistencies and gaps in logic that I noted here and there. (Faith doesn’t seem to care if there is no logic, anyway, right?) For this reason, I am rating this well dramatized audiobook a 4 out of 5 very thought-provoking and engrossing stars!